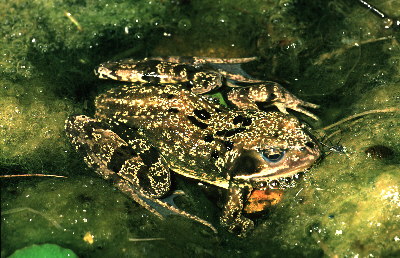 Since 1995 frogs have spawned in two or more ponds each year, and the subsequent tadpoles that evaded the heron and other hungry beaks have turned into miniature adults that we find under stones and in the vegetable garden.

A neighbouring farmer (400 metres away) says he has seen frogs in his yard for the first time ever, so its likely that the introduction was necessary (i.e. there was no local population to reach our ponds). 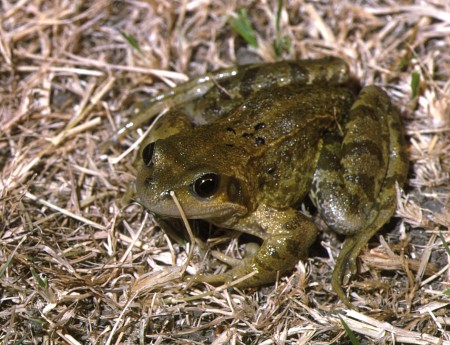 This frog was photographed soon after we discovered their summer night habits. A very dry summer - the stuff that looks like scattered hay was the lawn. 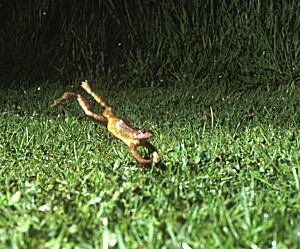 Occasionally a frog will leap through the trigger beam of our night-photo kit and take his picture. Not quite what we had in mind, but rather fun. 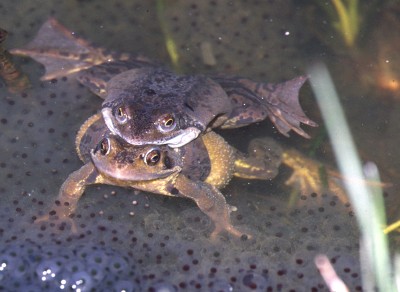 A pair of frogs mating one March.

The spawn is initially very gelatinous and forms clumps that poke out of the water. Over the next few days these hydrate and soften to a flat sheet. The black specks grow, and a week or two later they break free of the jelly and form black masses of wiggling life before dispersing in the pond.

To tell Frog and Toad tadpoles apart, look for external gills (feathery outgrowths behind the eyes) which are present only in Toads.