We often hear cuckoos April and May, but they hover around the borders of the plot 100 metres away, or call derisively as they fly overhead.

But one evening in May 1998 3 Cuckoos were so busy 'arguing' about territory that they were perching and calling only 30 metres from our windows, and we got some photos from the room we use as a 'hide'. 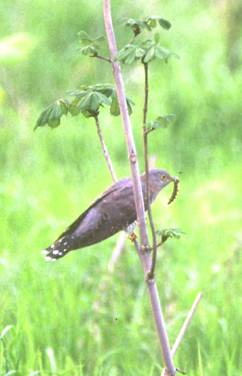 Cuckoos lay their eggs in other birds nests, one egg per nest. The chick hatches quickly, pushes all the other eggs and/or young out of the nest, and then gets the dedicated feeding of the host parents who are often half the chicks size. Different cuckoo species 'parasitise' different bird species. If we ever get a photograph of the event or a cuckoo in a nest, it will appear here!

Cuckoos are insectivores - here is one with a caterpillar. 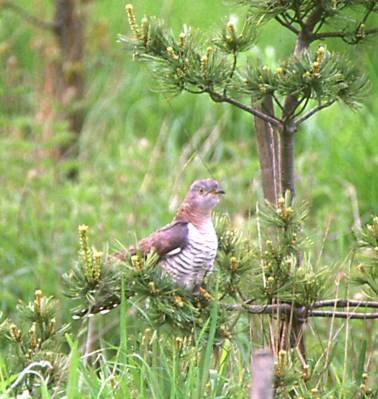 And a final view in a young conifer.

We also managed a recording of a Cuckoo Calling (73K)