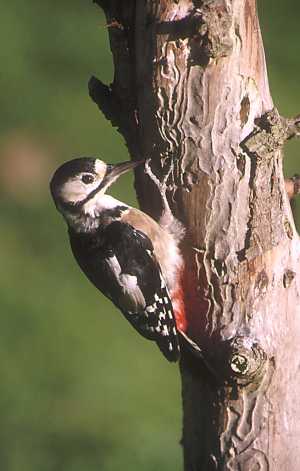 We see (and hear) two species of Woodpecker.

This is the Great Spotted Woodpecker on a dead tree stump - actually the post of a peanut feeder, and she is waiting her turn for some nuts.

These birds are insectivorous, but the Great Spotted has the agility to get food out of peanut nets. They can be seen to queue up or fight for access, in the cold weather.

Our plot doesn't have any trees old enough for them to excavate a nest hole in, but every year youngsters appear and are fed peanuts. One year a pair nested in a 70 year old Lombardy Poplar that is a one-off among Black Poplars that line one side of the farm track, but our own woodpecker nestboxes have so far always been commandeered by Jackdaws 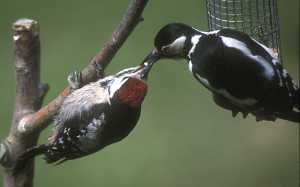 Here the parent (female on the right) is feeding a juvenile nuts fragments she is extracting from the obvious feeder. 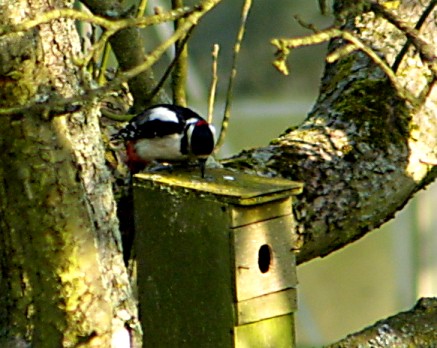 The Great Spotted Woodpecker dominant sound is not vocal but drumming. Basically the bird hammers on a piece of wood that it finds resonates well. This is usually a piece of dead heartwood, but in spring 2001 this male (drumming is a territorial matter) found that a plywood tit-box makes a magnificent amount of noise, and accumulated an hour a day hammering away, mostly in the morning and evenings. Needless to say the box has not got any tits in it - well not once this started anyway. This recording of the Great Spotted Woodpecker Drumming (126K) was recorded from 30 metres away.

When Woodpecker are pecking over the bark for insect food, they peck only once or twice a second, with very little sound as the wood is usually soft. 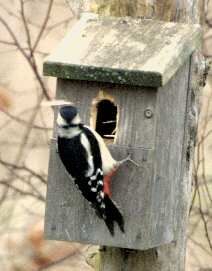 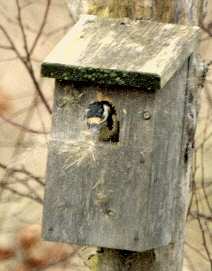 In February 2004 a pair decided to 'do a house conversion on a Great Tit box we have on a dead elm stump. The female chiselled away the normal hole in the 2cm thick wood and cleared out the old nesting over a 2 day period. The female did all the work with the male turning up to inspect and discover he couldn't get in yet, so she refined the hole until he could. The two images are early in the chiselling phase, and during the next day house clearance. We do have a proper woodpecker box elsewhere which has never been used! 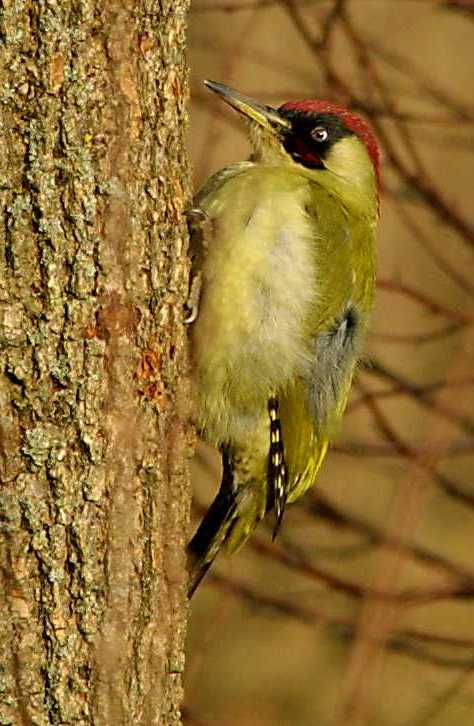 This is the Green Woodpecker on a dying elm trunk riddled with tasty insects.

Actually we usually see him either on the grass probing for insects, or flying overhead making a very characteristic 'mocking' call which you can hear as part of the Great Spotted Woodpecker Drumming (126K) where the distant call immediately after the first drumming is the a fortuitous call of the Yaffle, affectionately known to us by this colloquial name. 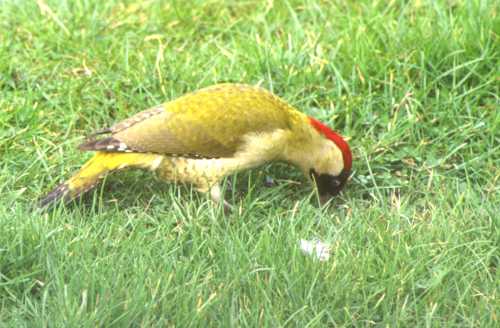 Here is our Yaffle in his more characteristic behaviour, probing the soft ground near a pond edge for insects. He will do this for hours, systematically working his way along the edges.